In a post-USA dystopia the teen rebel Libertaria escapes from a GenTech death factory and pairs up with her addict father to overthrow the evil Collective in the exciting machinima opera by award-winning composer Sabrina Pena Young.

Like this? Then check out AMAZON BESTSELLER Composer Boot Camp 101, a comprehensive guide to songwriting, composition, and film music with 50 exercises for students, educators, and music professionals!

In a post-USA dystopia the young teen Libertaria escapes from the GenTech Death Factory and pairs up with her addict father Simeon to blow up evil reverse-aging geneticists called the Collective. Searching for the mysterious Nurse that saved her life and is now buried deep within the dark soul of the Factory, Libertaria and Simeon lead a rag tag army of cyborgs, kids, and misfits against their high tech overlords. In an epic musical finale, Libertaria finds that she must save the world in order to save herself!

In 2010 Young embarked on a new journey as she developed the idea of a virtual electronic musical. Starting as a short story about a young geneticist that found that she was experimenting on her own mother, the idea for Libertaria exploded into an epic tale about a young hero combating evil geneticists in a post-nuclear war world where the USA has splintered into several factions, the young and the old are preyed upon by the government, and the only hope for freedom depends on a secret Underground militia made up of cyborgs, children, and misfits led by a runaway teen rebel!

Libertaria is an animated machinima tale for our time, the proverbial hero tale of the underdog saving the world!

Then you will love Composer Boot Camp 101:
50 Exercises for Students, Educators, and Music Professionals! 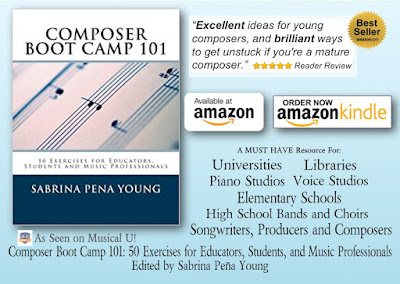 For there, near h…
3 comments
Read more