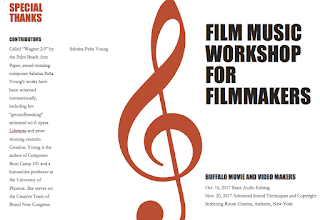 What is film music? What role does film music play? Filmmakers will learn the basics of audio editing, film music, and sound design using Logic Studio.

Filmmakers will learn advanced techniques like equalization and pitch correct, especially in use for animated shorts and features, as well as engage in discussion regarding music licensing and copyright.

The Buffalo Movie and Video Makers (BM-VM) was established in 1934 and is one of the oldest running organization of its kind in the U.S. We provide education, support, encouragement, assistance, and a showplace for filmmakers, those with a tangent interest in film (writers, actors, etc.), people who want to help others with their films (production associates, admin., etc.) and people simply interested in watching something different and new in film. Members currently include filmmakers and those with an interest in film, as well as those with skills and talents tangent to the film industry such as actors, writers, film editors.

Black Min said…
Let Me Love You (https://ringtonedownload.in/let-me-love-you/) is a Marimba Remix track. You can download this ringtone for free with the size of 295.24 KB at Ringtonedownload
July 25, 2018 at 5:12 AM

For there, near h…
3 comments
Read more