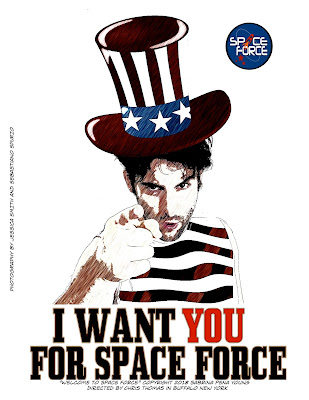 Part of Young's Indie Filmmaker Boot Camp challenge, the film production moves from concept to realization in six weeks. Usually hosted in Kenmore, this became a "Rogue" Boot Camp when the group found themselves without a location due to a paperwork error. Nonplussed, the group decided to get together anyway and met in Webb's basement. There they brainstormed ideas and came up with a concept centered on Space Force.

The first day of production went smoothly, with actors and crew alike almost literally dying of laughter. Chris Thomas directed the group, which included seasoned pros and first-time filmmakers. There are two filming days left, then a week left for editing after the Buffalo 48 Hour Film Festival. Many of the cast/crew members of "Welcome to Space Force" will be participating in the 48 Hour Film Festival. It's an exciting time to be a Buffalo Filmmaker!

Indie Filmmaker Boot Camp creator Young hopes to enter the film into a number of film festivals after production ends, including the Buffalo Dreams and Fantastic Film Festival this fall. The previous Indie Boot Camp Film "The Noise Within" was screened locally at the Screening Room Cafe in Amherst and won First Prize in the Buffalo Movie and Video Makers Annual film contest.