The Long Road of Opera

By Music Maven September 03, 2012
I've been working for the last year and half on my first full-length opera Libertaria: The Virtual Opera. Writing an opera has been challenging, and as I am finally putting the final notes of the opera on paper (or more like MIDI), I thought I would share a few thoughts I have had along the way that may help other aspiring opera composers. After all the, form seems antiquated and sometimes struggling in the days of cute YouTube videos of singing kittens (oh, so cute!).

So here are some humble thoughts about opera, inspiration, and the motivation to create something great. 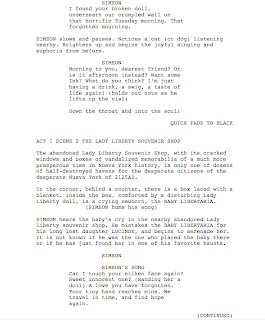 Motivation
What was the motivation behind Libertaria? I had always wanted to compose an opera, and I have always wanted to create a feature-length film. Libertaria is the marriage of these two incredibly ambitious dreams. To be honest, my motivation was simple. When I was teaching at Murray State University, one of my talented students, an emerging composer named Alan Manning (remember that name) wrote his first symphony as an undergrad under the guidance of composer Dr. Mike D'Ambrosio. I realized that the only way to write an opera, to achieve this type of masterpiece, was to simply tackle the opera as my student tackled a symphony. And if I made mistakes, then I make mistakes (of which I have made plenty!).

Inspiration
My concert works seem to fit into two categories: Autobiographical and Political. Libertaria is the result of an unfinished sci-fi novel that I began writing years ago. In the novel, the main character, an orphan and brilliant scientist, works at a genetics lab. Only later does she find out that one of her patients is her biological mother.

In the opera, the lead character is the product of a genetics lab and is fighting the proverbial evil scientists in search of her long-lost mother figure, the Nurse, who has quite a few secrets of her own. The plot meshes sociopolitical commentary with the complexities of the parent/child relationship.

Opera Plot Elements
Maybe I am a bit too snarky, but I made sure that besides the proverbial sci-fi plot (fight the evil scientists to save the world!), I also included some basic opera musts including two singing "death" scenes, unrequited love, and a complex web of relationships that Shakespeare and Freud would have appreciated.

Music
Libertaria: The Virtual Opera includes various musical elements: opera, electronic music, film music, experimental classical music. The main cast serves as voice actors to the animation, supported by a virtual choir and an electronic film score. There are touches of both the opera and the American musical in the opera, which may cause purists to shudder.

Machinima
Libertaria is a contemporary opera that is animated. The type of animation used for the opera is called machinima, which is an animation style originally inspired by video game engines. Essentially machinima involves "directing" virtual actors in a preset virtual environment. The animation team is using software like Moviestorm, Poser, Maya, and Bryce to create the overall look for Libertaria, which is a nice combo of graphic novel imagery and subtle animation.

How to pull this off?
To be honest, this has been a labor of love between the cast and crew, as well as other important supporters like Dr. Clare Shore, who serves as Music Adviser. The choice of an animated opera added much more work for myself, as I have to act as both composer and director (not to mention librettist and the screenwriter). On the other hand, the final form of an animated feature gives the opera a much broader opportunity to play for the public. And as this is an opera for the populace, the video format will be easier to share via social media, festivals, and online.

Final Thoughts
Well, I do need to head back to writing, but I thought I would share a few more thoughts. If you want to create your own opera, I suggest just doing it! Yes, it will consume a lot of time, and you will need to be creative with your resources, but with the way technology has shrunk costs and the world in general, you can create whatever masterpiece you set your mind on. Happy composing!